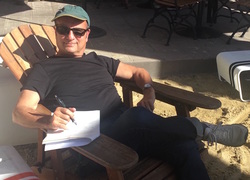 STEPHEN WITKIN  is a WRITER for FILM, THEATER, TV and CORPORATE

A native of Toronto and subsequent New Yorker, Stephen currently lives in Los Angeles where his screenplay, OFF RAMP TO BABYLON was in development with HBO Pictures and Killer Films with his Hallmark TV movie, "Five Star Christmas" as #4 in the season's ratings. His comedy screenplay, MANIACS was featured at Montreal’s Just For Laughs Festival, and his screenplay, GLASS HOUSES, winner of the One In Ten screenwriting competition was recently under option. TV credits include the TV movie LOVE-STRUCK and nominations for a Cable Ace Award for two seasons of THE MAX MOVIE SHOW for Cinemax and as writer/producer for HBO Behind-The-Scenes Specials.

In the world of theater, Stephen’s Aesop musical, THE FABULIST, won the Richard Rodgers Develop­ment Award that funded staged read­ings at the York Theater in Manhattan. Since then, there have been readings at The Village Theater in Washington State and was showcased at the Global Search For New Musicals in Cardiff, Wales. Stephen also wrote the book for the Off-Broadway cult hit musi­cal PROM QUEENS UNCHAINED at the legendary Village Gate, with a CD featuring Betty Buckley and Barry Wil­liams. Other New York musicals include the family musical, CANDLES, SNOW AND MISTLETOE at the Palace Theater on Broadway and A CENTURY OF ENTERTAINMENT featuring the Rockettes at Radio City Music Hall. Witkin also wrote musicals for Atlantic City: FLYING at Caesar’s Hotel, which was nominated for an Entertainer of the Year Award; and AIN'T WE GOT FUN and LADIES OF THE CHORUS at the Sands Hotel. Canadian productions include over 200 productions of the hit musical, EIGHT TO THE BAR; YE GODS! at the Charlottetown Festival; plus MUSICAL CHAIRS and family pantos, ROBIN HOOD,  SNOW WHITE AND THE MAGNIFICENT SEVEN and CINDERELLA at the Elgin Theater in Toronto. Published works include Prom Queens Unchained, Eight to the Bar and a coffee-table book, A Thailand Journey.

SEE NEXT PAGE FOR NEWS & THE LATEST...